Posted by Kristi at 8:14 AM No comments:

This week has been so fun!

With weather in the record breaking 80's, we have spent every moment outside.

It has been those kind of evenings where I close the garage door, make the boys strip down and run while I remind them "don't touch the walls" as I chase them to the bath tub.

We've seen butterflies, 2 snakes(!), and everything is suddenly in bloom.  The snakes were this weekend -thankfully when Nathan was home.

We've made mud pies, dug countless holes in the sandbox, played at the park with friends, ate snow cones, and just lain in the grass looking at clouds.

What a glorious week!

Posted by Kristi at 9:03 AM No comments: 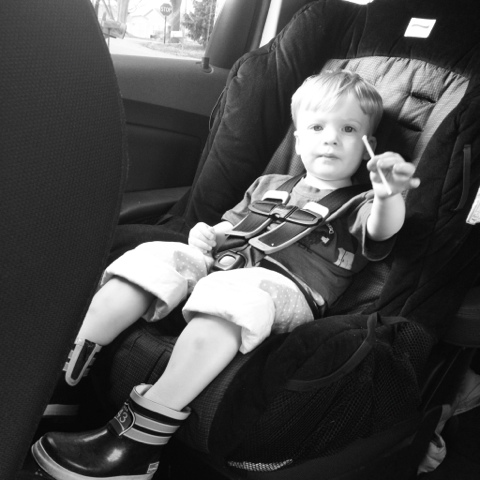 Posted by Kristi at 4:15 PM No comments:

It is ironic that only yesterday I was talking to be friends about how I don't like "chores" or chore charts. How I want my kids to do things because I feed and put clothes on them, and that as part of the family, they should do it.

Well...after weeks of verbal "banter" about getting money to buy things they want that this mean mother won't buy them, I caved in and gave them a chore chart that they kept asking me for.

Figures my grand idea of no chart (and that grand idea to my aforementioned friends) of them just wanting to help their poor old mother out of the kindness of their hearts wasn't going to work.

To make it easy for me and meaningful for them, I attached each chore a price as well as a picture with the needed supplies for my only picture readers.  Nathan and I will choose four chores a day they have to do, they choose four they have to do, and the rest is icing on their chore cake.  We will keep a tally right there on the chalkboard contact paper and do the adding together.   I'm attempting to keep it a mixture of things to do so they can expend the things they can do. Plus I added non-chore things to the list like no TV, spending 30 min. with a brother, and exercising.

I'm curious to see if this one works. We did a marble jar before.  It was great at first then it became competitive and I'd have my hands full in who knows what and not get a marble here or there.  It just became a pain.

I hope this helps them see the difference saving means.  Later, once the idea of money is more tangible, we'll start helping them think on ways to organize it:  donations, savings, spending.

Right now I just want to get through the week.
Posted by Kristi at 9:12 PM 1 comment:

Linking up with Ginny's weekly Yarn Along posts...

Right now my needles are clicking away on a triple set of vests for Easter.  I've bought a collection of blues for my boys' Easter Sunday attire. I'm using the Basic Vest for Children and it is just that - basic, plain and simple.  I picked a cheaper yarn, Cascade 220 Superwash, and wish I didn't.  I just isn't as nice as I thought it would be.  I just hope they wear them other than the day I make them.

The first issue of Taproot came in the mail today.  I'm just smitten with it.  The editor letter had me right away.  I'm looking forward to slowly pouring over it!  My medium boy is trying to learn knitting.  I think he likes the idea of us knitting together all cozy on the couch rather than him actually doing it. Because of his sudden desire to become a Knitter, we have been reading one of his favorites  Knitting Nell (over and over and over) all week.  It is a sweet book and I'm happy to read, and read, and read it to him.
Posted by Kristi at 6:34 AM 7 comments:

Sorry Heidi Klum, Nina Garcia and Michael Kors...I know the stripes don't match and they are pretty gaudy.  You can bet I will never try out to be on your show.  Promise.

But these Quick Change Trousers so much fun to make!  These are my second pair and are just pieced together with some recycled Gap jeans, Anna Marie Horner fabric, and some scraps provided from my mother-in-law.

Luckily my guy is such a peanut that he will fit into the 18-24m. pants for quite a while.  I've bought some really cute fabric from the Fabric Worm to try and make yet another pair.  My goal is to make enough pants and shorts that they'll last him until fall.  I also love how they are reversible!  Since stains are a common occurrence with the bandit, I can just turn them inside out.  woot.

sorry for the poor pictures.  I had to send an "angry" email to Nikon about my camera - which they didn't respond to.  Luckily, the same nice help desk person who sent my camera in for the third time it had been (still) broken found out that parts should be here this week.  It 'only' took them a month to get them in.  Don't they know I'm a professional mommy!!  I've missed so many things.
Posted by Kristi at 8:40 PM 1 comment:

Posted by Kristi at 6:53 AM No comments:

Patterns and Other Blog

Kristi
Here to share my daily adventures with my children, home and needles.